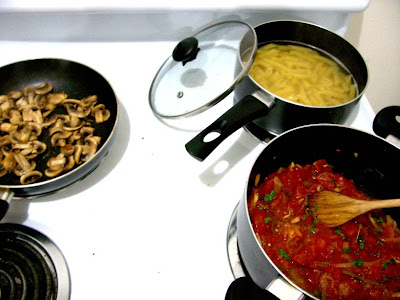 This week´s Fork it in Friday meal is a simple, quick pasta dinner designed by Daisy Martinez and featured in Everyday with Rachael Ray. Puerto Rican Spaghetti with Chicken is a tasty dinner that boasts strong bold fresh veggie flavors. I substituted fresh button mushrooms for the chicken, as Husband and I both adore fungi, but the base of the sauce is what really makes this dish work. I highly recommend trying it soon. The ingredients are all wallet-friendly and the dish itself is all-around family friendly as well.  As Martinez quips in the magazine clip, “It´s a recipe for feeding the troops… doubling the batch is easy enough.” Yum! I can´t wait to make this again.

« Technique is Everything
Mango Crumb Bars »