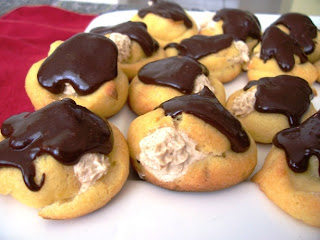 It all began with Sopa Azteca. On a whim, Husband wished to invite a few business colleagues  to dinner,  requesting Aztec soup be served. Dessert was another story. Soup,cheesecake? Soup, cookies? Nothing seemed quite right. You see, all week long I’d had my heart set on making an exquisite cake, something new and sophisticated, decorated to perfection. Unfortunately, I just could not bring myself to bake this beauty for such a small crowd. Even forcing the guests home with a few slices, there’d still be a few enchantingly temping portions in the fridge.

This morning it came to me. After tossing and turning at early daybreak, I woke up to find visions of cakes dancing in my head refusing to grant me additional rest. As I lie awake considering dessert possibilities to accompany Aztec soup, out of nowhere, cream puffs took center stage in the cake ballet, pirouetting and prancing to great heights. “Perfect!” I thought, and dessert was settled: Aztec-inspired cream puffs.  Whisper-light pâte à choux enveloping cinnamon-scented sweetened cream and drizzled with spicy cocoa glaze made with central american cocoa, cayenne, and canela.

I adore cream puffs. In high school, I was the president of foreign language club. Twice a year, we organized a multicultural celebration and invited certain classes to come join us in the festivally adorned gymnasium throughout the day. Each and every celebration, whether Dia de los Muertos, Hanukkah, or Ramadan, our Deutschland table was piled high with cream puffs from the international grocery. Let’s just say I took my liberties as president to sample these delicacies once, twice, and many many more times.

Since then, I’ve made a few batches of cream puffs that didn’t come from the  freezer section. Back then I’d assumed that these foreign delights were too difficult for the homegrown chef to attempt. How very wrong I was. Today I’ll walk you through the simplicity that is  pâte à choux. After this, you’ll be free to make profiteroles, gougères, éclairs and more!

1. Preheat oven to 425F. Sift the flour into a bowl. Put the milk, water, sugar, salt, and butter into a saucepan over medium heat until it reaches a boil. 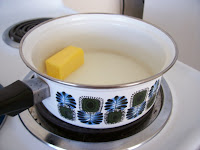 2. Remove from heat and pour in the flour at once. Stir quickly until the mixture sticks together and becomes thick and glossy, leaving the sides of the pan clean. Allow to cool slightly. 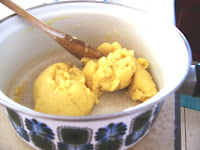 3. Add the eggs, 1 at a time,  and beat with a wooden spoon or sturdy whisk until thick, glossy, and drops reluctantly from a spoon. Spoon into a pastry bag (or freezer bag with a corner snipped off). 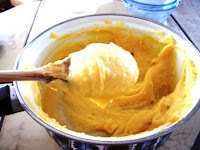 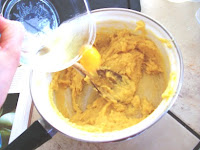 4.  Dampen a baking sheet with cold water and pipe walnut-sized globs of the mixture onto the baking    sheets. Leave some space for them to rise.  Using a dampened fingertip, gently tap down any peaks that may have formed from piping (or they’ll brown too quickly). I forgot this step! Bake 20-25 minutes, until they are golden brown and puffed up. 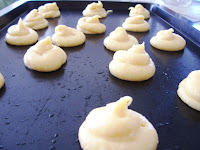 5. Remove from oven and use the handle of a wooden spoon to poke holes into the sides of the puffs to let steam escape. Don’t worry if you misshape a few of the puffs, the glaze covers up mistakes. 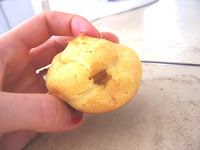 Voilà, that’s all folks! Pat yourself on the back. You’ve conquered  pâte à choux! 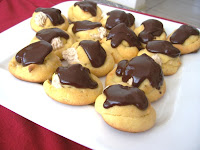 Add to a small bowl all ingredients and whip on high speed until cream forms stiff peaks. Spoon into a piping bag fit with a small star tip and insert into the holes in the cream puffs. Fill puffs until pudgy and remove nozzle.

Stir together cream, cocoa, and sugar. Once a paste is formed, add the remaining ingredients. The mixture should be thick, but able to drizzle from a spoon. Add sugar or cocoa if too thick, cream to thin. Drizzle over cream puffs. Store covered and refrigerated no more than 3-4 days. 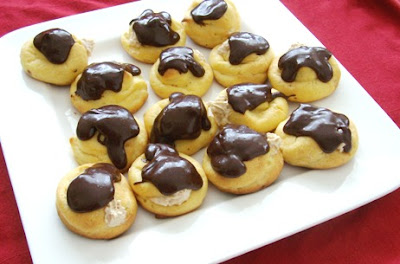 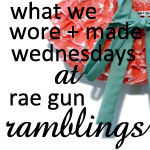