This week we still had an extra loaf of bread in the freezer but our sourdough starter still needed either a feeding or use. I decided to try something new with this week’s dough. Something delicious, a little lighter than the normal ooey gooey cinnamon roll, and exquisitely soft and tender. I liked the texture of these rolls even better than my favorite cinnamon roll recipe, which is really saying something. 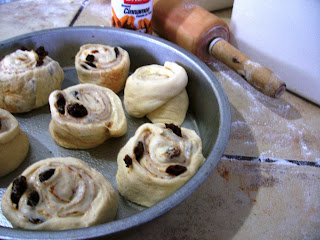 After dough has risen once, roll to rectangle of 1/4″ or so. Mine was about 12×18″. Using a spatula, spread a thin layer of margarine atop dough. Sprinkle with Splenda, raisins or other topping, and cinnamon. Roll up from center tightly. Using kitchen scissors (the dough is too soft for even a serrated knife unless you freeze it) cut into 2″ rolls. Place in greased 9×13″ baking dish and allow to rise in a warm place. (I place dish in warm oven with a mug of boiling water, uncovered.) When doubled, preheat oven to 350F and bake rolls for 18-25 minutes, or until done. Mix up topping and smear over rolls. Sprinkle with cinnamon and enjoy.